The movement without music 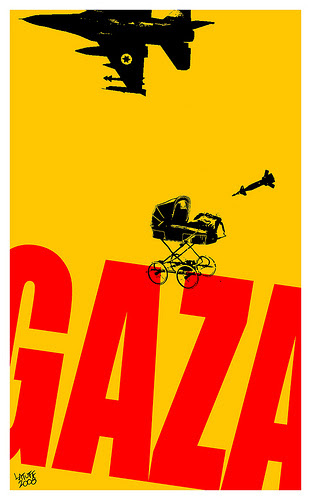 
A few days ago, I posted one of Al-Thawra’s songs, “Gaza: Choking on the Smoke of Dreams,” on the Internet for free download. We wrote the song the day after the Israeli bombing started on December 27th, 2008, and we intended it as a commentary on the sheer human tragedy of the siege. In fact, the lyrics to the song never attack Israel by name, but rather highlight the destruction and desperation on the ground:

“Raining from the sky, like summer ‘45. White flag in the air, drowning in despair.”

Though we wrote the song over a year ago, we didn’t make this song public on the Internet until the one-year anniversary, because we were saving it for our upcoming album. Since our group’s roots lie in the punk scene, raising political awareness is more important to us than an arbitrary release date or a perfect mix, so we leaked the song.

The next morning, my inbox was filled with hate mail. One message simply said, “Burn Gaza to the ground.”

Had the writer said the same thing about a Western locale, the outrage would’ve echoed across the Internet and even those shitty Conservative talk shows that clog up the AM airwaves during lunchtime. So, for the past few days, I’ve been thinking about what sets the Palestinian situation above the realm of mainstream political activism, especially in the world of music.

While it may seem trivial, music does have a profound role in creating social change. Before recorded music, and even in the early days of the “record industry,” music served a very practical purpose. In folk music around the world, music was used both as propaganda and an archaic form of a newswire. In some cases, such as the Black Spirituals from the American South during the slavery period, it helped to uplift and even give maps to freedom. In the Middle East, Sufi Mystic, Mawlana Jalal Ad-Din Rumi emphasized song’s ability to penetrate into the secrets of the heart-beyond the reach of the written word.

Music takes social issues out of the realm of the ivory tower and the newsroom and makes it easier to relate to. Even legendary, early twentieth century, union organizer and songwriter Joe Hill noted its importance when he said, “A pamphlet, no matter how good, is never read more than once. But a song is learned by heart and repeated over and over.” But contemporary pop music has shifted the paradigm away from quotidian relevancy.

Pop music is lyrically centered around neutral topics that ultimately ensure its profitability. For example, this weeks top three songs according to Billboard are: Ke$ha, “TiK ToK;” Iyaz, “Replay;” and Lady Gaga, “Bad Romance.” These songs speak about partying, meeting a girl, and love respectively. The juxtaposition of these consumer-oriented songs with the larger state of the world illustrates pop music’s break with not only music’s traditional role, but also a disconnect from reality.

Despite this, there has also been a great deal of musical activism over the years, even by mainstream musicians. There is little doubt that the Antiwar Movement of the 1960’s would’ve gained such a foothold in the American public’s consciousness, had it not been for musicians like Bob Dylan constantly singing in protest. And in the late 1970’s and early 1980’s in the UK, peace punk bands like Crass, almost single-handedly supplied the troops to replenish the protests of a dying Campaign for Nuclear Disarmament. And of course, the legendary super-group Band Aid played a large role in raising awareness and funds for famine-stricken East Africa.

But, even more than 60 years after the Nakba in 1948, very few musicians are willing to speak out against the Palestinians’ plight through music. Yet, the same images of suicide bombers and Israeli airstrikes loop on nightly newscasts, as yet more casualties are tallied. In fact, instead of sympathy, this constant plastering of images has had the opposite effect. Inadvertently, the images of this conflict have become subliminally ingrained in American pop culture in a sour way.

Maybe Americans are tired of hearing about the Middle East, but that doesn’t mean that the humanitarian crisis has ended by any means. And, of course, this does not justify the fact that Anti-Arabism and Islamophobia have become essentially become the last forms of socially acceptable racism either.

Many entertainers frequently say things about Arabs and Muslims that could never be said of any other group without repercussion. Radio shock-jock, Don Imus’s infamous quip about an American soldier shooting a “raghead cadaver,” is just one prominent example. And in the political arena, the United States and Israel famously boycotted the UN convention against racism because of the international community’s condemnation of Israel’s systematic segregation, racial profiling, discrimination, and displacement of the Palestinians. Had the US pulled the same thing in the 1980’s in defense of its trading partner South Africa, then an apartheid state, would the international music community stayed as quiet?

The Palestinian movement does not have its own Bono. There are no mainstream figureheads for this movement.

But there are some American musicians speaking out against the Gaza siege. Last year, thousands of people took the streets to protest in solidarity with the people of Gaza and against the Israeli atrocities, and musicians not only performed, but released songs in support. Bay Area hip-hop artist, Excentrik (formerly of N.O.M.A.D.S.) released “Gaza Gaza.” Also, hip-hop act, Narcicyst, & singer, Shadia Mansour, collaborated on “Hamdulilah Gaza.” Even singer-songwriter, Michael Heart, released, “We Will Not Go Down.” This somewhat underground, parallel music scene oversteps the boundaries of genre and forgoes foreseeable profits in favor of making socially meaningful content. It finds its unity in issues, not record sales.

Unfortunately, its message is “ghettoized.” As the old adage goes, those who speak about these topics usually are “singing to the choir.” In other words, the message doesn’t go anywhere past people who would otherwise already be aware of the issues. But this is not the goal of music.

Bands like these, including us, are fighting to get our voices heard by the general public, but we are stifled by hierarchy of the music industry. Instead of airplay, we rely on word of mouth. But ultimately, change starts with one heart at a time.